It's that time of year again! The days are short, the weather is shitty, what better way to boost yourself out of your seasonal depression than by making unrealistic expectations for yourself. I wanted to set goals for myself that are attainable, so no weight loss resolutions for this guy!

Lost in the Woods

There is a song that I really enjoy called "Lost in the Woods" (no, not this one, but it is good too). It's by a band called Taproot and it is off their 2005 album, "Blue Sky Research." I admit that I have not been a huge Taproot fan over the years, but that album is fantastic.

Read more »
Posted by Brad Thingvold at 6:58 PM No comments:

The Problem with Perfidy

Been a while since I lasted posted. I really let myself get out of the habit. I would love to make a post about something positive: new artwork, report from a recent comic convention, announcement of bar bingo winnings. Unfortunately, this isn’t one of those. It’s one of those yucky personal posts full of heartache.
Read more »
Posted by Brad Thingvold at 5:38 PM No comments:

Why do you make it so difficult to love you?!

Eh, I suppose that's a gross over-reaction to the issue I have. I work in the fire alarm industry. I have for almost fourteen years now. Specifically, I sell electronic systems and components - detectors, manual pull stations, etc. I don't sell sprinkler systems or equipment, but - as part of my career - I do have more than a general knowledge of how they function. Here's what everyone needs to know:

Pulling the handle of a fire alarm manual station will NOT activate the sprinkler system!!

If you see a fire, please pull the handle on the manual station on your way out of the building. It's going to make alot of noise and - if the system isn't too old - have alot of flashing lights as well. The senses of the folks in the building may be overloaded for a bit, but that's just more reason for them to get the fuck out of there. If they're at work and it's not the weather isn't too terrible, who knows, you may be doing them a favor!

Okay, to be fair, not all suppression systems are created the same. There are some systems - like those you would find in a computer server room - that are activated by manual pull stations. The ones you will find almost anywhere - schools, offices, retail stores, hotels, apartment buildings, etc. - are not activated via pull stations, however. In those situations the sprinkler heads themselves are activated when the air surrounding it reaches a particular temperature. This is variable based on the situation, but it's high enough - unless the sprinkler system designer/installer is shitty at their job - that it won't happen unless an actual fire is present. Typically, there is a glass bulb filled with liquid which shatters allowing the water in the pipe connected to the head to be released. From that head only. Not any others - unless a fire happens to be near those other heads.

Damage to the sprinkler head can also release the water behind it. Have you ever seen signs in hotels next to sprinkler heads asking that people not hang clothes from them? That's the reason why.

"So, how does your anger towards Hollywood factor into this, smart ass?" Glad you asked. While spinning their yarns, the writers, directors, and other creators of film and television magic frequently depict mechanical sprinkler systems being activated by electronic means. While I get that it's done for the purposes of the story and without malicious intent, over the years it has become a point of frustration for me. I can't help but believe that at some point, somewhere in this country - or the world even - a person who has legitimate reason to activate a fire alarm pull station, has hesitated, or even elected not to do so because they don't want to activate the entire sprinkler system. After all, that's how it works in the movies!

Why would this person want to ruin the electronics in the building, soak people with dirty sprinkler water (that's another myth of the movies - the water in the sprinkler pipes is not clean) and generally piss everyone off over something that may not be an emergency? Prior to being in the fire alarm industry myself, would I have felt this same hesitation? I don't recall anyone ever explaining to me what actually happens when a pull station is activated.

Also, while sprinkler systems are very common in new construction these days, that hasn't always been the case. Many older building have been "grandfathered in" and have not had to get up to current code standards. Those buildings may have an electronic detection/initiating system, but not a sprinkler system. Eventually, that system will probably activate (although very old systems may not have automatic smoke or heat detectors located near the source of the fire so the activation may take a long time), but that leaves several important seconds - or even minutes - where people could be evacuating the building. A person who visually notices a fire - or potential - fire can help that. As long as they are not concerned that pulling that fire alarm handle will cause other problems, that is.

This whole blog came about as I watched "Jeff, Who Lives At Home" this afternoon. There was a scene towards the end set in an office where the Hollywood sprinkler system myth came up. I get why they did it. It certainly upped the dramatic qualities of the scene (a side note, I had no idea that was Rae Dawn Chong until the closing credits), but it made me a bit frustrated and took me out of the flow of the story.

Anyway, I don't expect to get more than a dozen or so views on this so I'm guessing I'm not really going to change alot of minds here! It is good to get this off my chest, though. Now perhaps I can start focusing on the many, many other things on my chest.

Posted by Brad Thingvold at 3:06 PM No comments:

Over the last few years I've incorporated digital methods and tools into my artistic process with increased frequency. One of the tools I use most is Clip Studio Paint. This has been my go-to drawing program. Recently I've been introduced to a new feature in CSP called "colorize" (thanks, Phillip Sevy!).

I do very little with color at this time in my career. I hope to start doing more in the coming months and years, but my plate is a bit full to give it any additional attention. The colorize tool is intriguing. I don't see it providing an avenue for a coloring option that is equal - or even close - to hiring a talented professional, still there is some potential here.

This is the coloring I created with CSP for a Captain Marvel drawing of mine. The coloring phase of this took less than ten minutes to do: 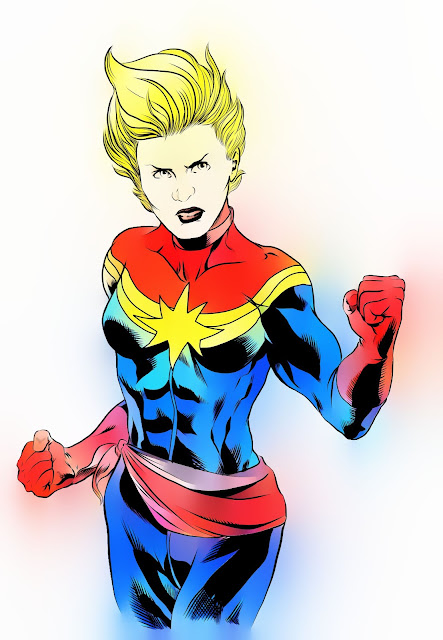 The "blur" around the character is something I don't think I'll be able to keep from happening. I could clean it up if I had to, but I think it's kind of cool. The color of her face got washed out for some reason. Not sure how to fix that. Alot of trial and error head of me, though.
Read more »
Posted by Brad Thingvold at 8:37 PM No comments:

Changes to the agreement

Hypothetical situation. An employee of a company - an important Team Member - joined a special opportunity about a half a year ago. This employee is very vital to the overall success of the opportunity. It's a situation the employee had been waiting on for a long time. The Opportunity Leader is wonderful to work with. Great communicator, patient, supportive, and honest. There were certainly some challenges along the way for the Team Member - including a relocation to another office - but this person was very happy and believed this opportunity would continue to be the career focus for many, many years to come.

Read more »
Posted by Brad Thingvold at 7:28 PM No comments:

The heartbreak of haircuts

Getting a new hair style has lately proven to quite the painful experience. Not because of anything the stylist does. In fact, she is fantastic. I am very happy with her work so far.  No, this has to do with the strange fact that each time I get a new hair style, I end up breaking up with my girlfriend.

It is really weird.

Read more »
Posted by Brad Thingvold at 9:08 PM No comments: